Wex has had a few weeks to chill and settle in to his new environment. He’s so quiet, you’d never know he is only 3 years old.

I decided to get on him, just to see what I’ve got. The picture below is from the first time I sat on him. I say sat, because to call it a ride would be generous. I probably did all of one lap around the ring at a walk. It wasn’t a good walk, but no one died, and that was really the only goal. 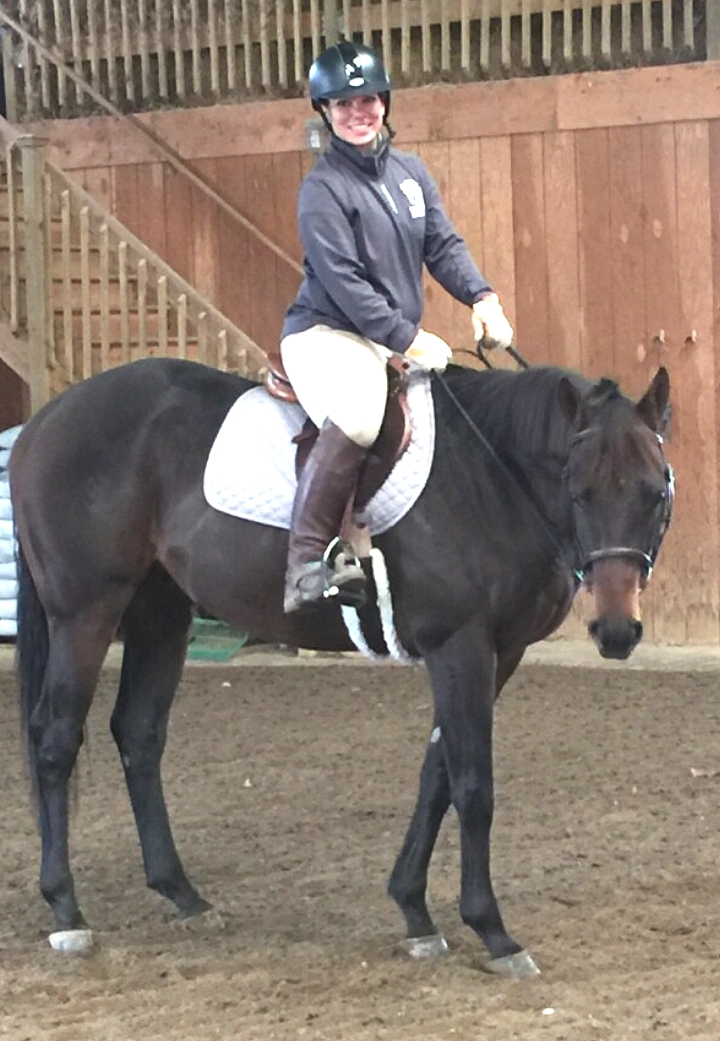 I had a saddle fitter out a few days after this “ride”. Turns out all 5 of my saddles are too wide for Wex. *sigh* The good news is that she was able to adjust the flocking on my County dressage saddle. That, plus my Thinline shim pad are a good enough fit while I get him started. I have my eyes open for a new jump saddle down the road.

After the saddle fitter was out, I hopped on him again, this time with my husband leading him a bit. We walked 4 or 5 laps this time (moving on up!) and it was much better. He’s very active with his head, so I’ll be adding a martingale for our next ride. I confirmed with his trainer that he was ridden in a yoke (basically a running martingale), so I’m hopeful that he won’t object too much.

The goal right now is really to install the gas pedal. He needs aids, which are completely different from racing. He’s not used to leg or a full seat. (For the record, I intend to do more half seat and two point, just as soon as I’m sure he’s not going to break my nose.)

I had planned to start Wex in dressage anyway, but it’s glaringly obvious that I’m a hunter rider in dressage tack. (Photo evidence below.)

Anybody have a medium tree Passier jump saddle they want to unload for a steal??