I think Wex has super powers. Every time I start him in work, he comes up with some new affliction. I decided he needed a boot camp with the dressage trainer at our barn. She’s quite good with young horses and she started him off with lunge work. Lunging has never been my strongest skill, so I am thrilled to have her guidance. The plan was for her to work with him while I was traveling for Christmas. Midway through the week, he lost a shoe. I’m sure he thought- this lady is making me work- nope! Fortunately the farrier came out quickly, and he was back to it.

Wex has opinions on things. If you’ve met any 3 year old, horse or human, opinions are something they have in abundance. Wex likes to do things when they’re his idea. For example, when he first arrived from the track, he refused to walk through gates. All gates. It took a significant amount of bribery (peppermints) to convince him that walking through the gate was a good idea. Sometimes, walking out to the pasture was not a good idea. If he decided he’d rather stay in his stall, there was no going out. I like to think of these as learning opportunities.

In talking to my trainer, the 3 year old analogy rings true. Like my 3 year old son, Wex can run. However, when you try to contain or direct his energy into something less like flat out running and more like precision ANYTHING, things get rocky.

So we began with lunging, since “forward” is not a direction that Wex particularly cares to go. After just a few sessions, he has gone from stand-off to responding to verbal commands, and lunging quite reliably. This week, she rode him for the first time, and all of the skills he’s developed in the last few weeks of ground sessions are evident under saddle as well.

We’ll continue working with our trainer, for at least a few months, and then hopefully keep taking lessons after that. I’m anxious to start teaching him to jump, but we must install 3 gaits first!

I grabbed this screenshot from a video I took of our trainer’s first ride on Wex. He definitely had some decent moments! The fact that he was moving forward and not throwing his head so much that I feared for her face, is progress for sure. 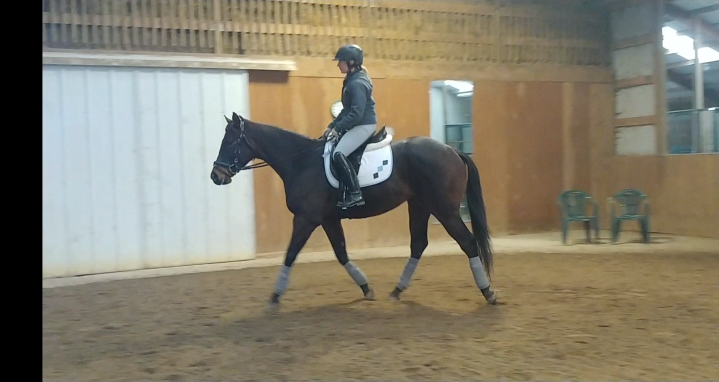